America experienced its worst financial crisis since the great depression between 2007 and 2010. Known as the subprime mortgage crisis, it happened because home prices fell in 2006, triggering loan defaults. Then the risk spread into pension funds, mutual funds, and corporations who owned the derivatives. It also spread into the global credit market resulting in higher interest rates and reduced availability of credit. Quantitative easing was necessary for several years to lower interest rates and spur economic growth. The cautionary tale to all Americans was learning to live beneath their means and do not carry excessive amounts of debt. Many Americans did not take heed and as a result, they are in substantial debt. One of the saddest cases of all of the debtors is the senior in their 60s and 70s in retirement years, and generally on a fixed income.

According to marketwatch.com, the current financial debt crisis among seniors is worse today than it was in the earlier 2000s. First-quarter debt in the year 2019 among seniors in their 60s was 2.17 trillion dollars according to data from the Federal Reserve Bank of New York. That is almost 1 trillion dollars more than quarterly numbers being reported in 2008 just after the start of the great recession. Senior Americans in their 70s are experiencing double the collective household debt than in the late 2000s. Second-quarter 2019 debt is 1.16 trillion dollars comparative to the .54 trillion dollars of 11 years ago. While younger Americans are also experiencing debt, those numbers are more consistent or even lower than the quarterly obligations reported during the spring of 2008.

Mortgages account for the majority of household debt across all age groups with older Americans, aged 40 and beyond, typically holding the most debt. The trend of a home equity line of credit (HELOC) is highest among those in their 50s and 60s. In essence, a HELOC functions like a second mortgage based on the current value of the home. A HELOC is not the same as a reverse mortgage which requires no repayment of the loan until the sale of the house. Surprisingly even student debt accounts for over one-fifth of household debt for Americans in their 50s. Americans’ penchant for not saving and overspending is sabotaging many a retirement. 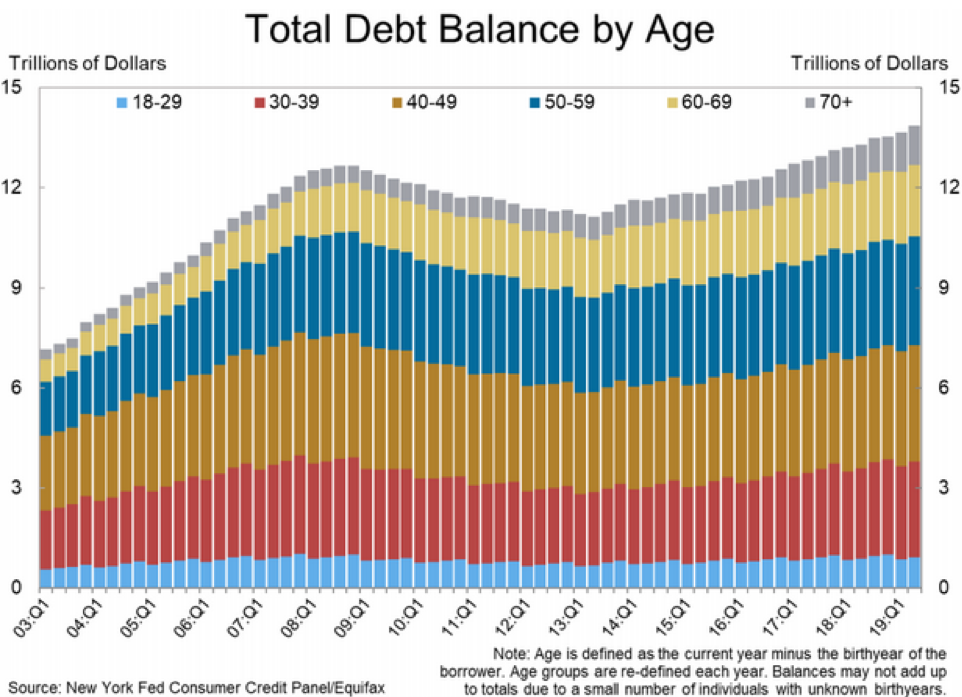 It is tempting to want to help a family member (usually adult children) by lending or cosigning a loan for education, a car, or home. However, this action can put you in great financial peril. Let that family member learn their fiscal responsibility rather than putting yours in jeopardy. Younger people have more time to rebound from an adverse economic situation. Those Americans in their 60s and 70s who are already retired and living on fixed incomes can experience crippling life events when carrying unpayable debt.

Remember that buying on credit increases the price of what you purchase. Within the credit card industry people who pay off credit cards in full every month are known as “dead beats.” Why? The lender can’t make any money off of the loan unless your payment is less than the full balance due. The lender makes the most money when you make the minimum payment and the lender can tack on interest to the debt. This is a negative debt cycle for the borrower.

Financial advisers will caution seniors to retire with as little debt as possible. If there is a real need to obtain cash or enter into debt, do not act rashly. Fixes like a payday loan will cost you a lot of money in the long run. It is much better to work with reliable professionals and lenders and create a realistic repayment schedule that works within your budget. If a reasonable loan cannot be struck, then look for ways to avoid needing the loan at all. The best question to ask about going into debt is, “Is this a want, or is this a need?”

We can help you work through how to handle existing or future debt as part of your overall legal plan. It does not take long for debt to pile up and destroy the hopes for a successful retirement. Contact our Norman, Oklahoma office by calling (405) 241-5994 today and schedule an appointment to discuss how we can help you with your planning.

My wife and I met with Tyler R. Barrett to help us with setting up a Family Trust, Will, Power of Attorney & Advanced Directive. Tyler was very professional, knowledgeable & very easy to work with. He answered all of our questions and was very focused on making sure everything was exactly as we wanted….